Home » Blog » How To Fix A Dripping Or Leaking Tap

How To Fix A Dripping Or Leaking Tap 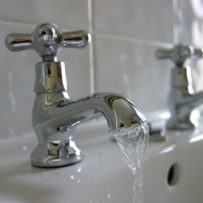 Repairing a leaking or dripping tap is generally a very simple job,  and one that anyone can do as long as they apply a little common sense.

This guide covers replacing the washer in a fairly standard tap design, the pillar tap. Mixer taps, where there are two taps, are a little different but the general principal is the same except you would normally have to remove the plastic handle to get to the valve. To remove the handle you would normally have to lever off a cover to expose a screw which holds the handle in place.

To repair a leaking tap – Step one:

Turn off the water supply. If you are really lucky you will have isolating valves under the taps which will isolate the tap or even the room, failing that,  turn off the water at the main stopcock which is usually located under the kitchen sink. If you are repairing a hot tap you will only need to turn off the hot water. Locate the hot water stopcock, usually in your airing cupboard, and turn it clockwise until it stops. Do not force it or you are likely to break the valve!

If you live in a hard water area and you don’t work your stopcocks two or three times a year chances are it will be jammed open. If this is the case then don’t force the tap. Simply apply a good squirt of penetrating oil (like WD40) and wait for 10 to 15 minutes and try again. If it moves and then sticks again repeat the oiling. Unfortunately some taps just get jammed open and there is not much you can do about it, leaving you to drain down the entire system, which makes it a much more difficult job to replace them.

If you have tap with the main valve nut as shown in the photo above you probably want to protect it when you remove it. The best way to do this is to slide a cloth in between the nut and the spanner which makes undoing the nut (and tightening it again) a bit more awkward but it helps to protect the tap from becoming scratched or damaged.

Now you have removed the valve, the next step is to check the washer. If it looks old and squashed and a bit rough then there is every likelihood that it is the cause of the leak. If the valve looks to be in good condition then the leak may be caused by damage to the valve seat which is the bit in the tap body that the washer presses on to.

The valve seat should be smooth, clean and free from scratches. Scratches are caused by little bits of lime scale that get trapped between the washer and the seat and grind away at it. If the seat is damaged it will need to be reground which is not a difficult job with the right tools.

Since tap washers are inexpensive it is worth replacing it – even if it appears to be OK. Washers are held on in one of two ways. Either by a small nut (which is invariably stuck due to lime scale) or with a fixed pin. I’m not sure which is worse. If you can get the nut free replacing the washer is trivial if the nut is stuck though it’s really hard. The pin system on the other hand might have less to go wrong but replacing the washer can be a challenge. The problem is that in order to hold the washer tightly the hole in the centre of the washer appears to be to small to go over the pin. The best advice I can offer is get someone strong in to help you and put some soap on the pin. I ended up using two grips to force the washer over the pin.

Now that you have replaced the washer it is time to reassemble the parts. Don’t forget to hold onto the spout of the tap while tightening the valve. Once the valve is tight and the tap is in place turn on the water supply again. A little tip for you~: At first turn on the mains just a quarter or half turn and then go and check for any leaks. If you don’t find any then turn it on full and then back half a turn. The half turn closed helps to stop the stopcock from sticking.

After everything is finished, the water is back on, your leaky/dripping tap no longer drips, just check your stop-cock gland (just underneath the nut) for any leaks.

David is a professionally trained tradesman, ready to undertake handyman jobs in Cambridge and around Cambridgeshire. Connect with David on Google+

I'm a professionally trained tradesman, ready to undertake handyman jobs in Cambridge and around Cambridgeshire.No job too small!

Connect with me here...